It was a typical Halloween Eve evening, weather-wise in Raleigh, North Carolina.  It should come as no shock to anyone that it was also October 30.  I’d rather hastily organized the 10/30 FOCM event just the day before as Brian Langin was coming to town.  Brian has the distinction of receiving the first FOCM card ever handed out.  So clearly, he was worthy of me getting people together.

Brian was first to arrive, followed by me and then surprise, surprise, surprise, Paula Brown Stafford joined us.  Paula and I have known each other for 22 years when I first started in the clinical research industry working at Quintiles together.  She has said to keep her on the FOCM event distribution lists as someday she just might surprise me and show up.

In what can only be described as one of the happiest moments of her life, Paula received her FOCM card. 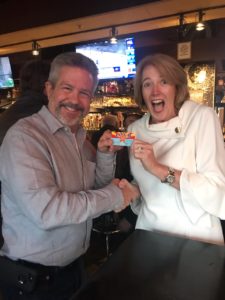